How to Help Timid Pets 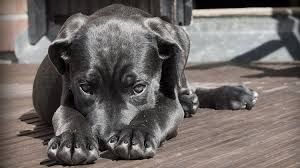 “Shy” is a word that many people use to describe dogs and cats who are fearful. Most often this “shyness” is a fear of strangers, but it can also be fear of new places, being handled, sudden movements or noises, other dogs or cats — or just about anything unfamiliar. The severity can range from mild (fear of a certain type of person) to very severe (fear of so many things that the animal is under constant stress).

It takes a special kind of person to adopt a shy dog or cat. Nurturing a shy dog or cat requires a lot of patience, since it may be months or even years before results are seen, but the rewards can be plentiful. Many shy dogs and cats, once they bond with their people, are affectionate and loving with them, even if they remain timid in other contexts.

Why are some dogs and cats shy?

Fear can come from many different sources, including genetics and previous bad experiences. However, many dogs and cats are fearful simply because, as puppies or kittens, they did not have enough of the right kinds of experiences. Here’s what we mean: When puppies and kittens are very young, they go through a once-in-a-lifetime phase of learning. This period starts when they are around three weeks old and ends between four and five months for puppies. For kittens, it ends earlier, around 12 to 14 weeks. During this time, providing puppies and kittens with many safe, happy experiences with strangers, sounds, objects, places and other animals can go a long way toward preventing a lifetime of shyness.

As people loving and living with pets, we need to be able to read their body language to discern what they’re trying to communicate to us, but it’s especially important with shy pets. Most cats and dogs who we consider bashful will simply retreat and hide, but sometimes expressions of shyness can be quite subtle. Reading body language to tell how a dog or cat is feeling is critical to being able to help them. Some shy dogs and cats will freeze and “shut down,” while allowing someone to approach and handle them. Many people wrongly believe the animal is fine in this state, but he or she is actually experiencing a great deal of stress. 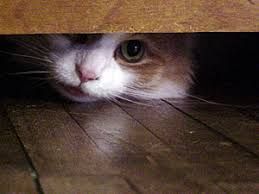 How to work with shyness in pets

There is one basic key to success when working with shy dogs or cats: Let them progress at their own rate. Pushing reluctant pets into situations where they are afraid is not only very scary for the animal, but it can make the fear much worse, and also increase the risk that they will reach a point where they are so afraid that they become aggressive. Some shy dogs and cats will bite or scratch if they are pushed too far.

If you’ve just adopted a shy pet, give him his own space, away from any household activity. Set him up with a comfy bed and water, and serve him his meals there. Let him adjust to the sounds and smells of the household. It may take time, but eventually most shy dogs and cats will venture out for short trips, which become longer as the pet’s comfort level increases. If you have a dog or cat who is so fearful that he won’t come out of his hiding spot for any reason, consult a relationship-based behavior professional.

Once the animal is timidly venturing out, use food to help him form happy associations with new places, people, sounds and sights. If he won’t take food from your hand, toss treats gently to him and work your way up to hand-feeding.

Other friendly members of their own species can be a big asset in helping shy pets. Some pets who are shy with people may be comfortable and even playful with other dogs and cats. Some reticent dogs will happily go on a leash walk with a canine friend, but not alone.

A caution about the risk of escape

People who adopt shy dogs or cats must be especially careful about the possibility of escape, since a timid pet who gets away from his person can be very difficult to catch. So, a big part of keeping shy dogs and cats safe is setting up the environment so they can’t escape. It’s a good idea to have “airlocks” around exterior doors, so that there is always a double barrier between the shy animal and the outside. If you don’t have a foyer with two doors to function as an airlock, use baby gates or exercise pens to add an extra measure of safety. Make sure all the people in your household know the importance of keeping these barriers up. Windows can also be a potential escape route, so make sure they are kept closed when the animal is in the vicinity. Window screens are often not strong enough to contain dogs and cats safely.

There’s also a high risk of shy dogs or cats escaping while transporting them, especially to a new home, so they should travel inside a closed crate. All pets, of course, should be microchipped and wear collars with proper ID, but it’s advisable to fit a shy dog or cat who is a particular flight risk with a GPS or other tracking device, to find the animal more easily if he escapes. In addition, when walking a shy pet on leash, use a very secure harness or restraint device with a back-up safety clip.

Having a shy dog or cat is not for everyone. It can be a lot of work, and it often means having to adjust your schedule and lifestyle to accommodate the animal’s special needs. However, as many adopters of shy dogs and cats have found, offering a safe haven to an apprehensive animal and seeing him make progress can be tremendously gratifying. And once you’ve gained their trust, you’ll know that shy dogs or cats can be just as loving as any other pets.